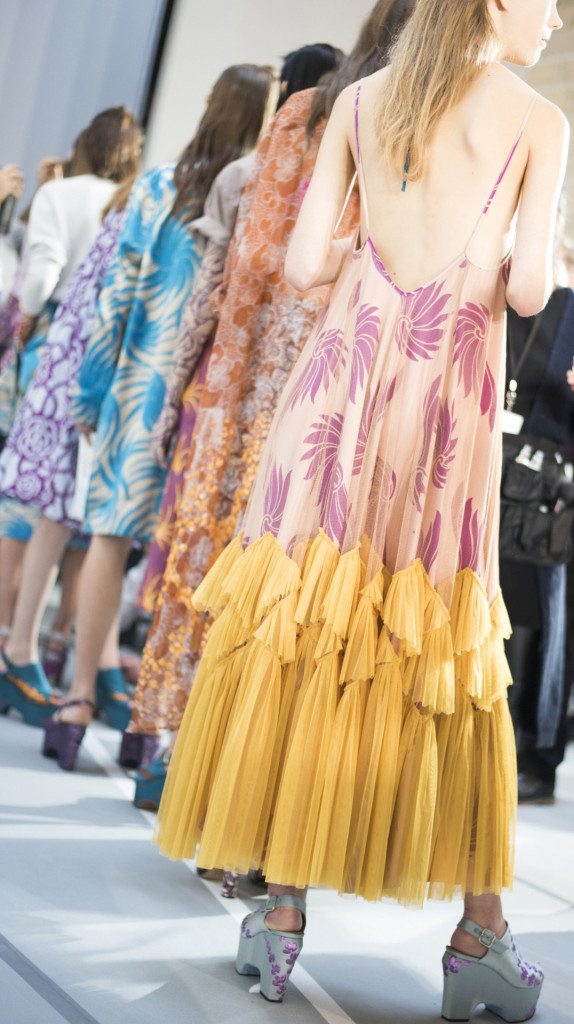 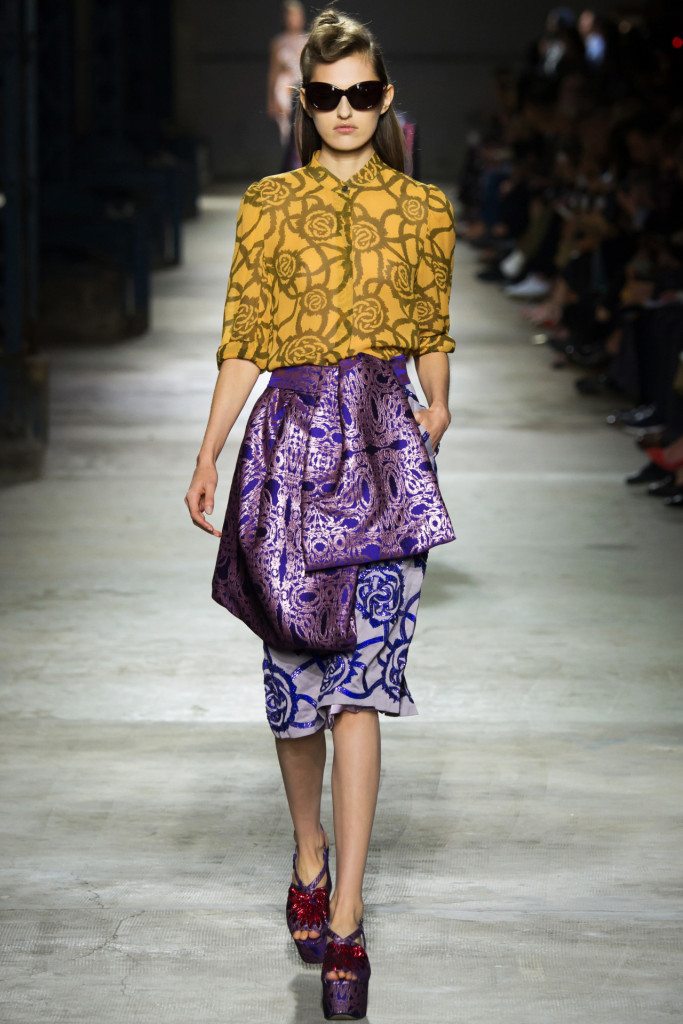 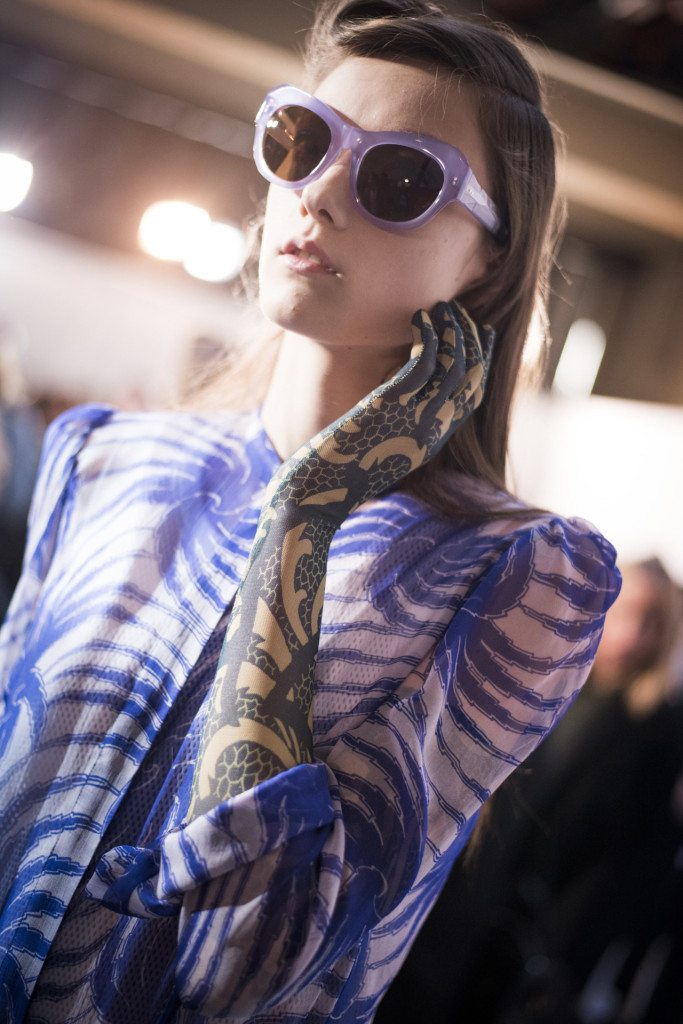 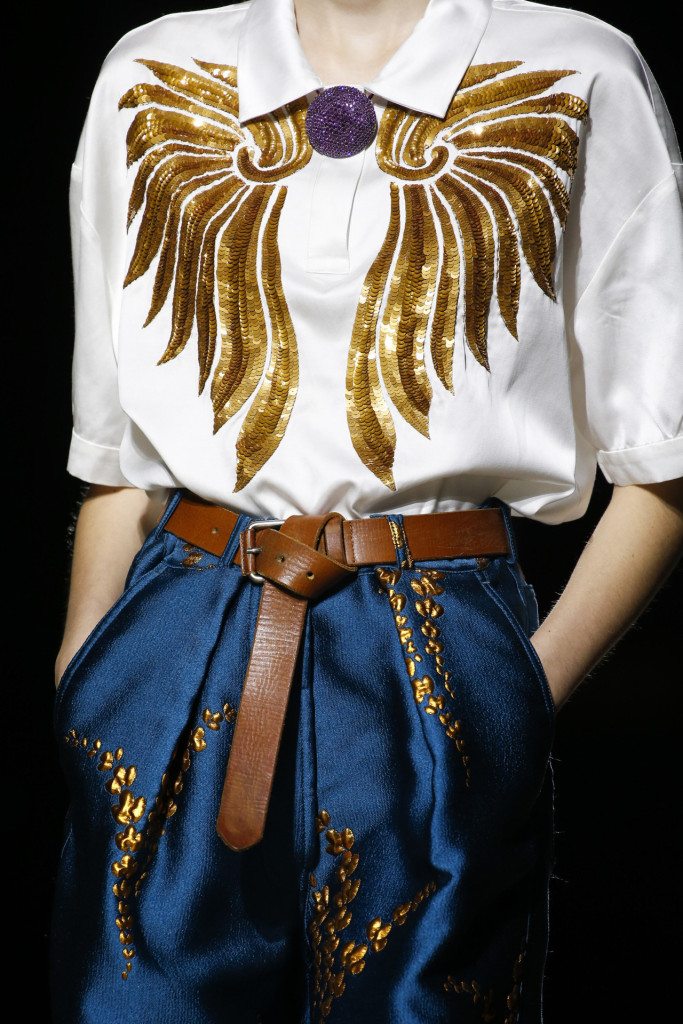 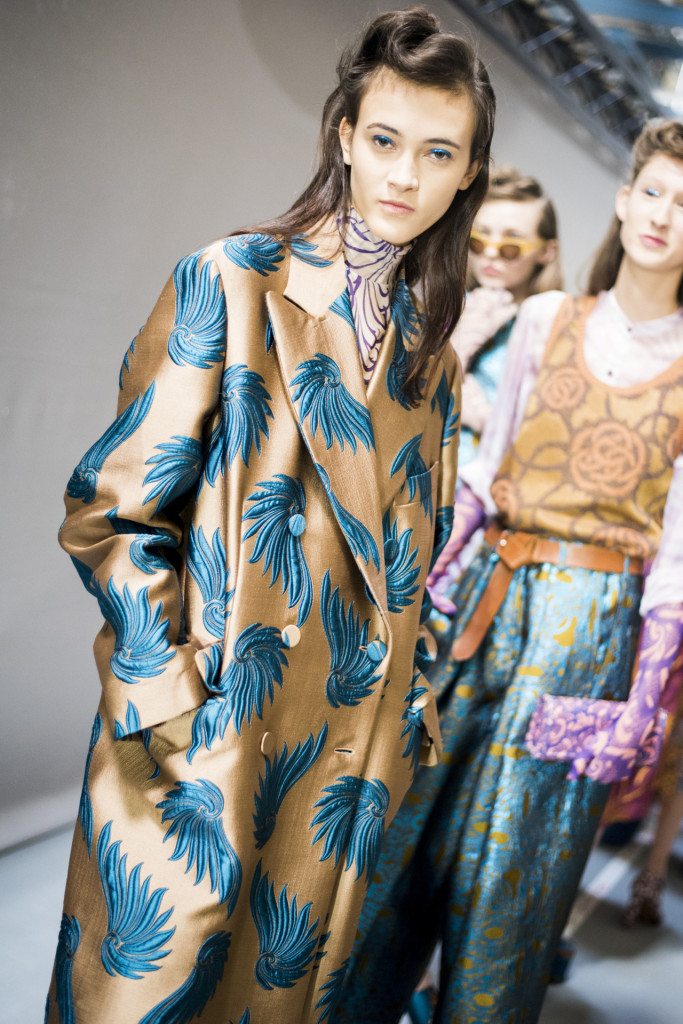 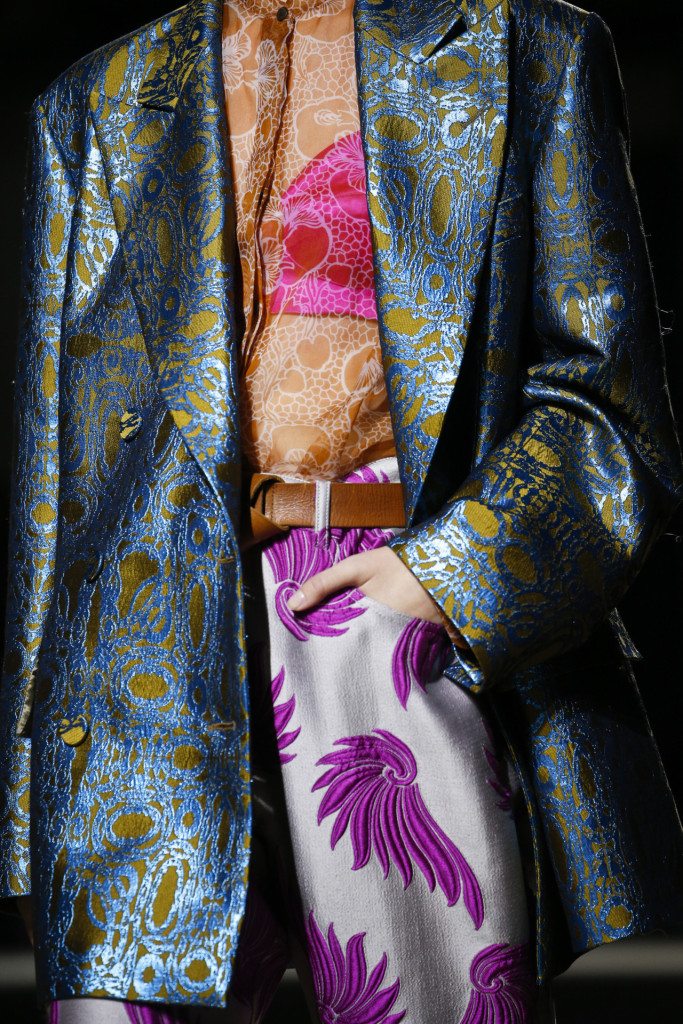 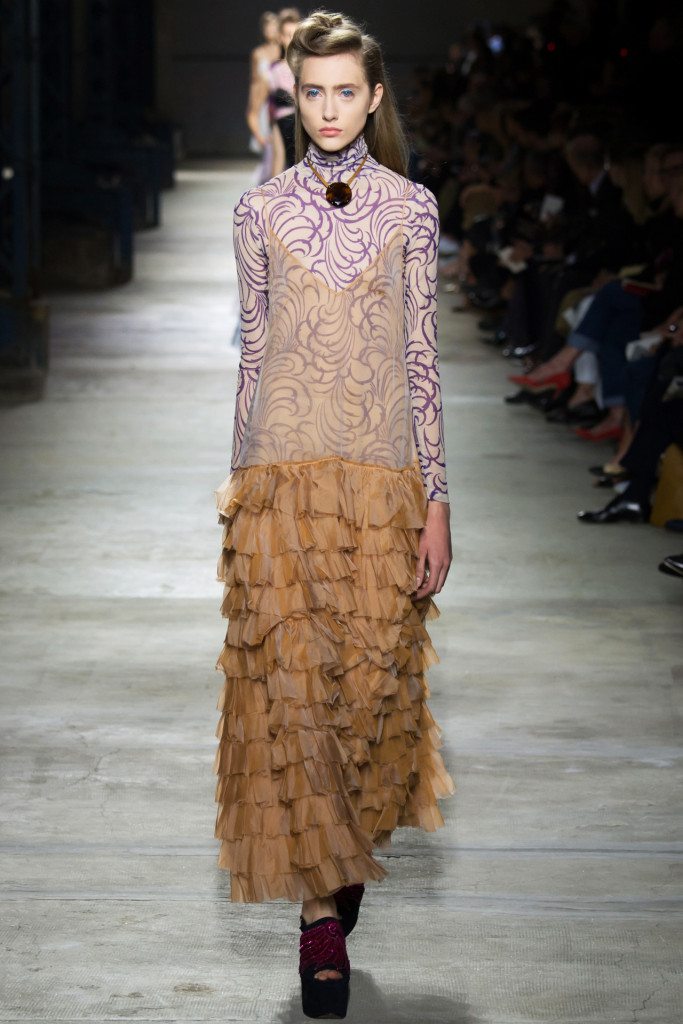 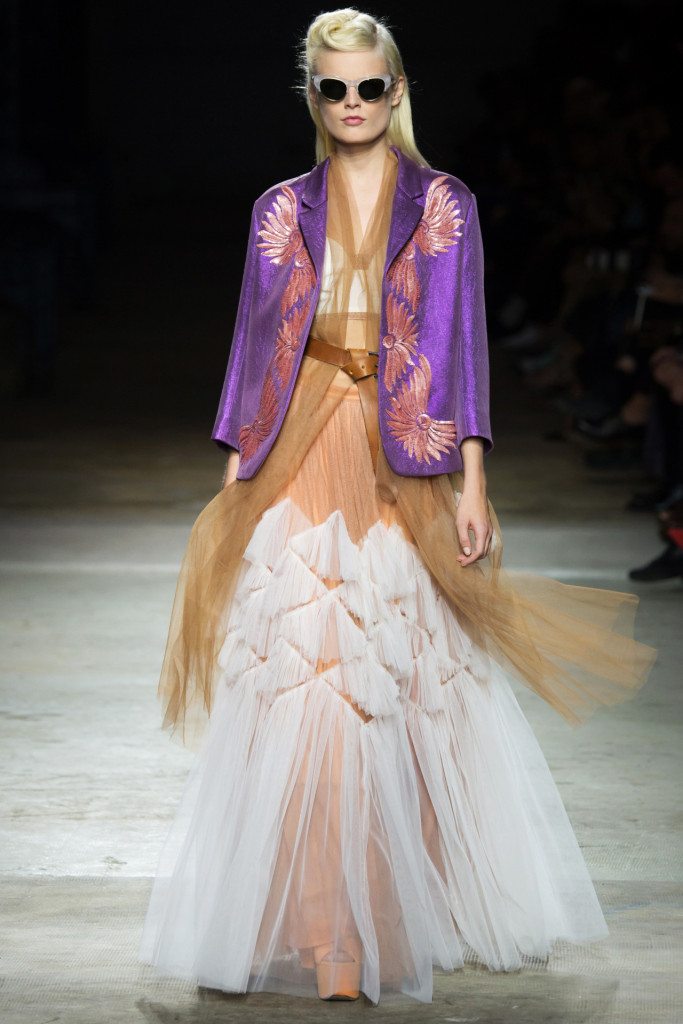 Accompanied by a string quartet, a 1940′s suave, and a sophisticated palette of the most dynamic fashions sent down the recent runways – Dries Van Noten has done it again. Spring/Summer 2016 was a nouveau-retro collection, which Noten described with as “vivacious, jubilant, fearless and flirtatious.” Noten is always looking ahead with his designs, never repeating a collection or an idea. Accompanied by an eclectic signature style, this Belgian designer is a ceaselessly inventive and creative virtuoso in the realm of fashion design.

The Spring/Summer 2016 collection was a smorgasbord of aesthetics. The idea of a rebellious post-war era was brought to life through second-skin materials used in gloves that gave the illusion of sleeve tattoos. The hues of the collection were some of the standout details. Muted purples and dusty beiges deviated ostentatious colors such as electric teal and hot pink. Some other quirky details were palms prints, tie-dye swirls, paisley patterns and whimsical chiffon. Paired with every outfit was a variety of colorful platform shoes. Noten’s shoes are so consistently lighthearted, they are almost always caricatures of a trend.

Full of patterns and details that were everything but abrasive to the eye, the collection was stimulating with passion and color. It contained nearly every silhouette known to fashion. The synched waists nodded to the late Christian Dior and the slouchy, cool-girl aesthetic mastered by Haider Ackerman contrasted bodycon maxi dresses and the ‘ugly chic’ layering we see so often at Prada. There were also references to Schiaparelli through symmetrical embroidery and eccentric ruffles. These examples are not to say that Dries Van Noten is a copycat by any means, he simply takes a classic look and reinvents it with his signature style. There are many reasons Dries Van Noten is held in the highest regard: his consistency to deliver an inspired show, his incapability to create a poor or overlooked design, and his audacity to mix patterns and colors that would otherwise look tacky, given it were any other designer styling them together.

In this collection Noten was evolving the idea of women playing dress-up. This was apparent in the flowy dresses, menswear mixed with womenswear, bras over sheer tops and references to the early 80s with a 40′s flare.  There is nothing more fun than going through your entire wardrobe and trying on different looks and layers for an exciting night out. Noten explains, “For me it was really about a flamboyant woman – she is not so careful. She is a woman who enjoys life and she goes for it. She dresses up to go to parties and to go out all night” (Vogue).

Photographed by Vogue and the New York Times.