During my time in Paris, I decided to take a macaron baking class. The sweet, delicate confections were a delight to make, but even more so to eat. Leaving with a box topping 50 macarons, I had plenty to share with my host grandmother, host brother and my other American roommate. Despite my generosity I still had too many for one sitting. Knowing that the life span of macarons only last a few days, if that, I ate them as quickly as possible. In that sugar high moment, when I was on a sole diet of beautifully delicious macarons, I was reminiscing on the story of Prada’s Candy.

The short film depicts the fragrance “Candy” and stars Léa Seydoux playing a coy if not naïve woman who is more interested in the junk food that surrounds her than her two suitors. Throughout the flick, she eats everything from a banana split, to movie theatre popcorn, to a double-vanilla-chocolate-almond cream cake. This same theme of luxurious ladies who munch on just about anything sweet continued throughout Miuccia’s latest collection. The Prada Fall/Winter 2015 palette consisted of not only the colors of muted pastel macarons, but also the palate of a sweet-toothed young woman.

The models’ hair was styled in 1950’s bouffant with a modern twist of a taut side ponytail. Perfectly glossed with generous amounts of hairspray, these ponytails hugged the side of the visage. The look was completed with decorative clips, just like the final dollop of icing to top off a perfectly polished cake. Daring color combinations such as baby blue, orange sherbet, blush pink and chartreuse green were mix-and-matched throughout the entire collection. Babydoll silhouettes, kitten heels, and revamped Mary Janes in the delicate hues of pastel Easter eggs echoed the theme of irresistible femininity. Overall, “the collection was a playground for women to express their desire for ultra-girly tropes” (Susie Bubble).

Molecular-style print and traditional Italian tweed were topped off with Muiccia’s signature staple, laser-cut perspex brooches with girly appliqués. Music from Walt Disney’s Fantasia played while the models marched down steel gridded hallways in a geometric set. The theme of futurism nodded at Miuccia’s use of genetically modified materials such as the jersey fabric she used to construct the double-breasted jackets, which many mistook for neoprene. The ideas of authenticity vs. fantasy and robotic perfectionists vs. inherent girliness played a major role in this collection. Think The Stepford Wives meet the princess of Candyland and there you have the Prada retro-housewife who is so flawlessly put together it’s uncanny, and who spends her days treating her palette and palate to pastel-hued candies. 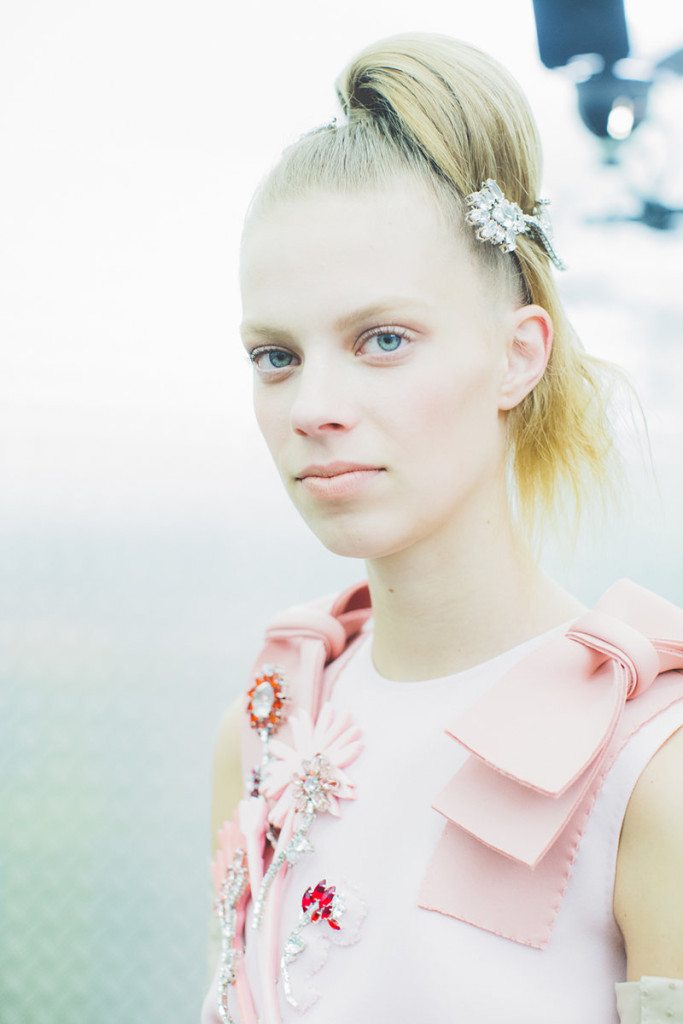 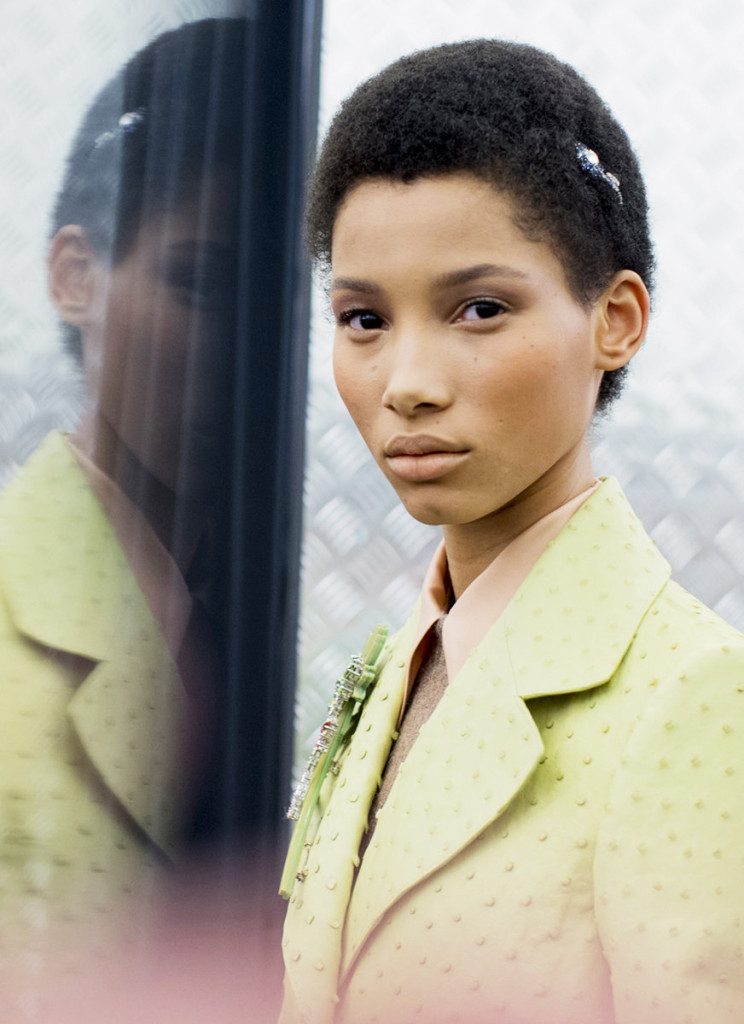 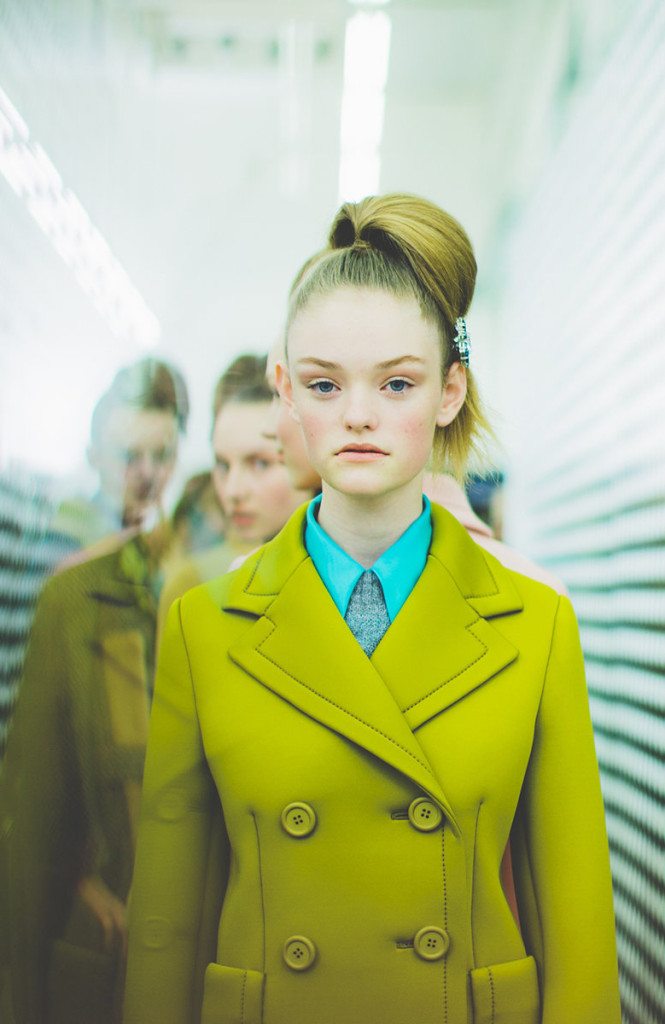 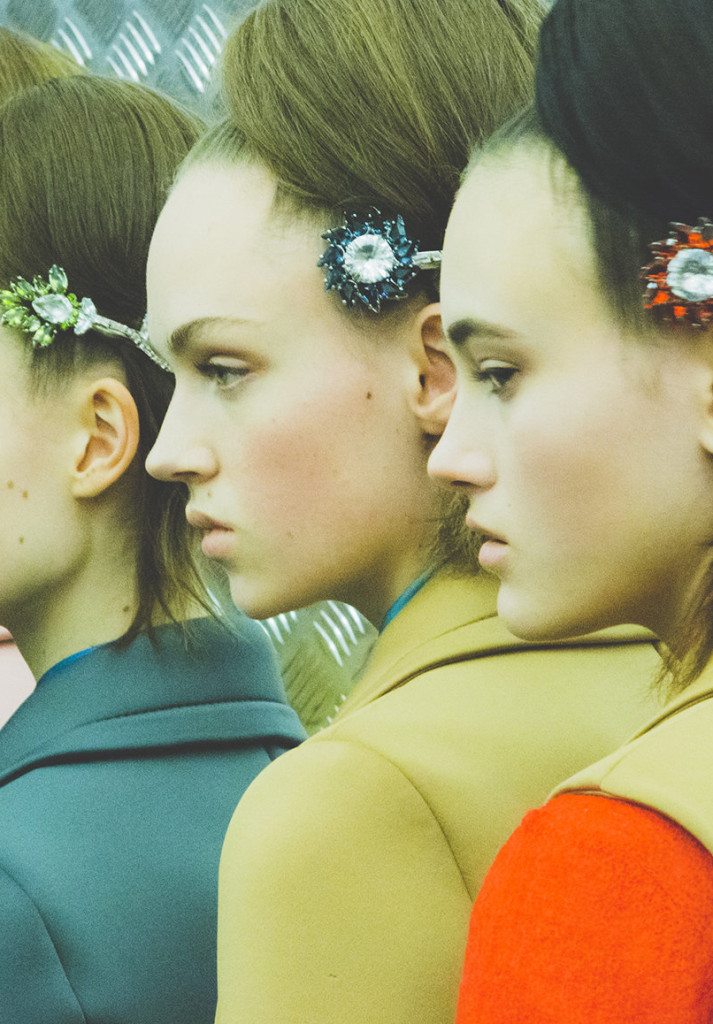 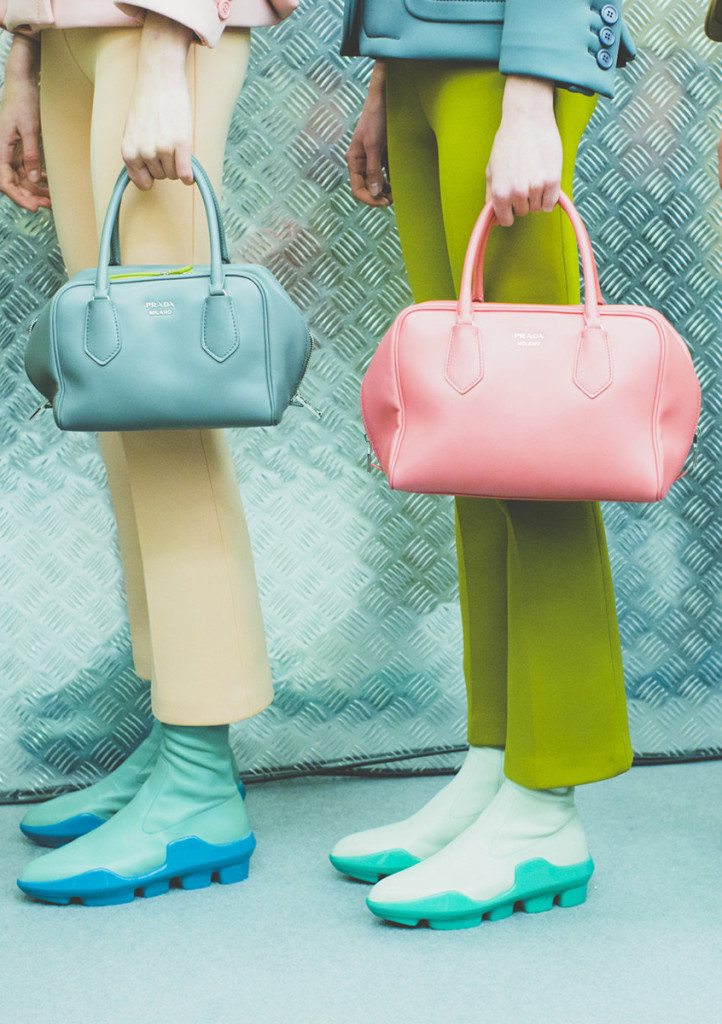 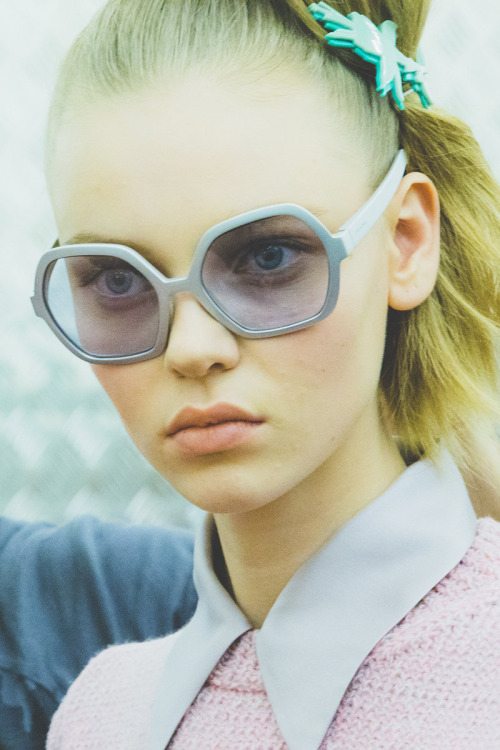 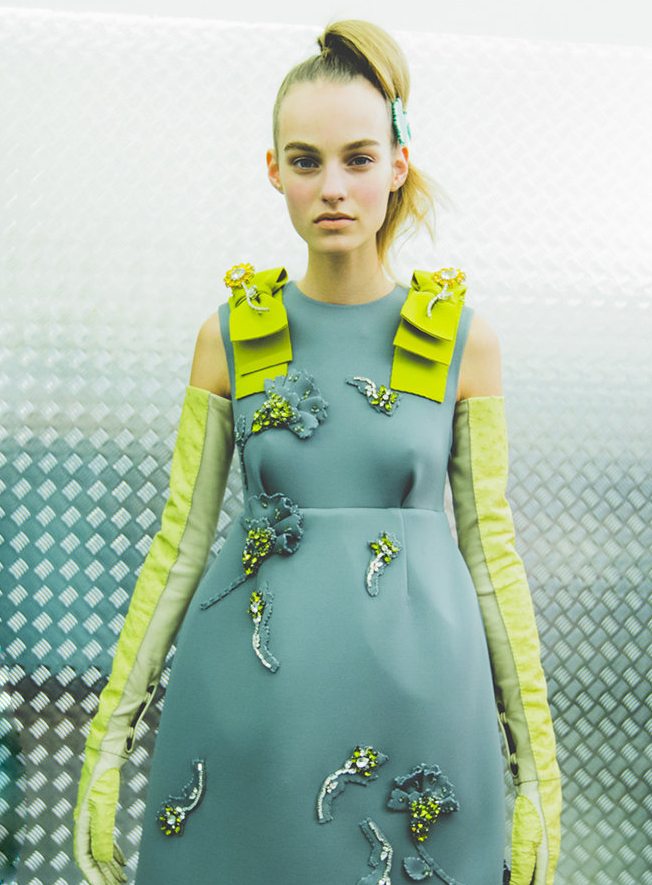 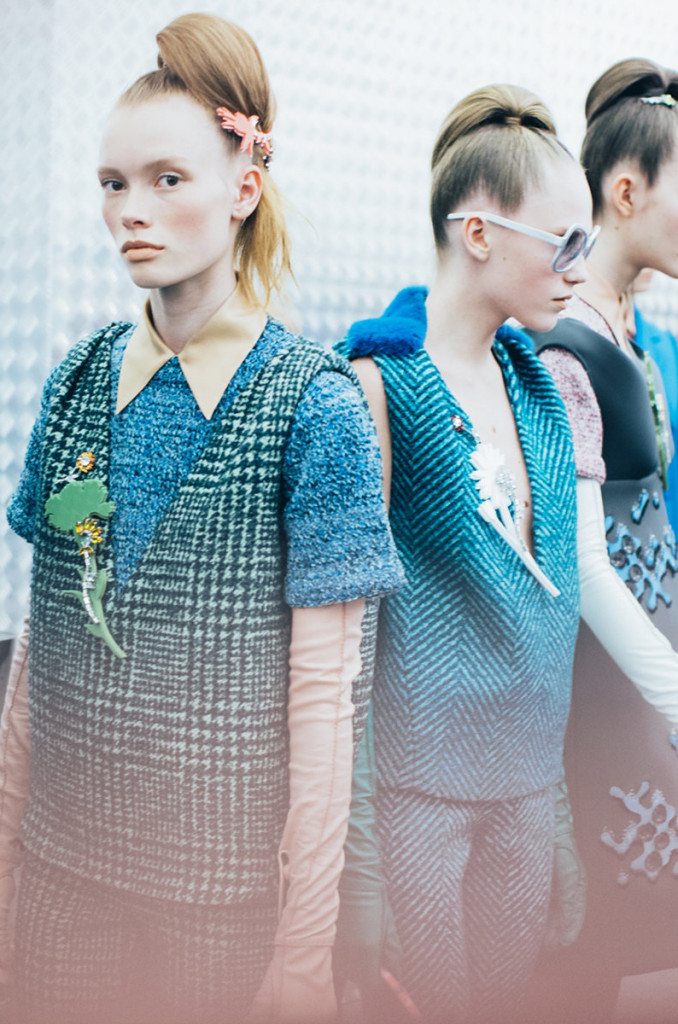 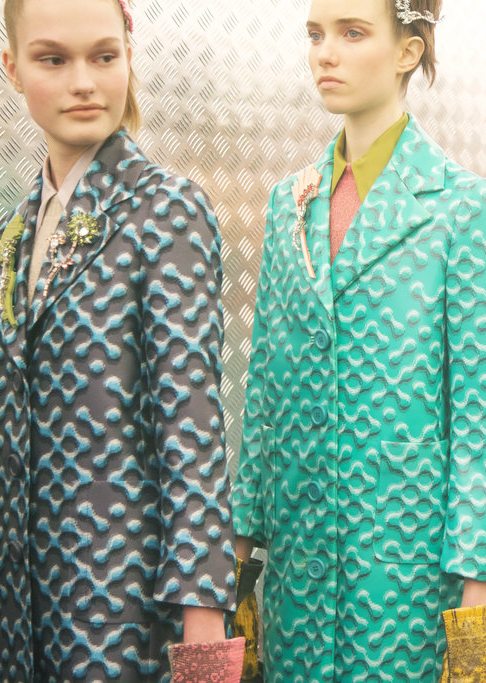