Welcome to my blog post about my cross country road trip to the United State’s National Parks. My husband, dog and I traveled from North Carolina and made it to our destination in Washington in April. I highly recommend hitting these parks up in late April because there was barely anyone there! We traveled through so many places I never even thought I would visit. Cross country road trips are on everyone’s bucket list and I’m so glad we had this opportunity to see America’s most stunning sights. Here is the full list of the places we hit up along the way: Georgia, New Orleans (LA), San Antonio (TX), Caverns of Senora (TX), Carlsbad Caverns (NM), White Sands (NM), Antelope Canyon (AZ), Lake Powell (UT), Monument Valley (UT/AZ), Zion National Park (UT) and Mesa Verde (CO). I hope you enjoy our photos from this trip. Scott and I went all out and bought a new Sigma wide angle lens for our landscape photography. Taking it on this cross country road trip was so perfect! 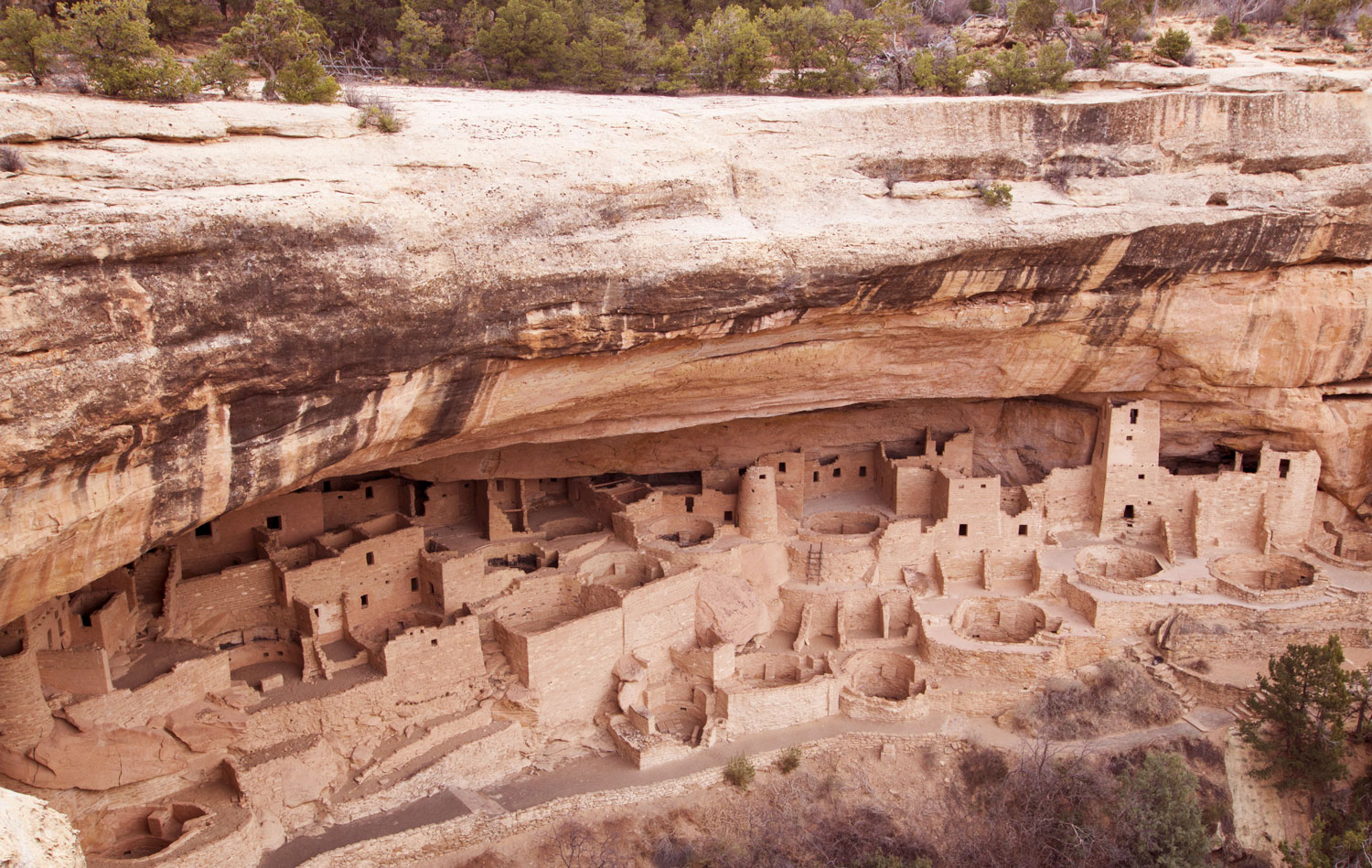 Mesa Verda is one of those places that makes you wish you had a time machine. This National Park is known for its ancient Puebloan cliff dwellings.  Mesa Verde, Spanish for green table, offers a spectacular look into the lives of the Ancestral people who made it their home for over 700 years, from 600 AD to 1300 AD.  Can you imagine what life was like back then? Every day proved a challenge against nature: the weather, elements and predators. Back then, people only grew to nearly 5 ft tall, so these humble communities could house up to nearly 100 people. I think it would be spectacular to be able to go back in time to see this civilization at its prime. The way humans developed and evolved throughout time is such an incredible story to think about… 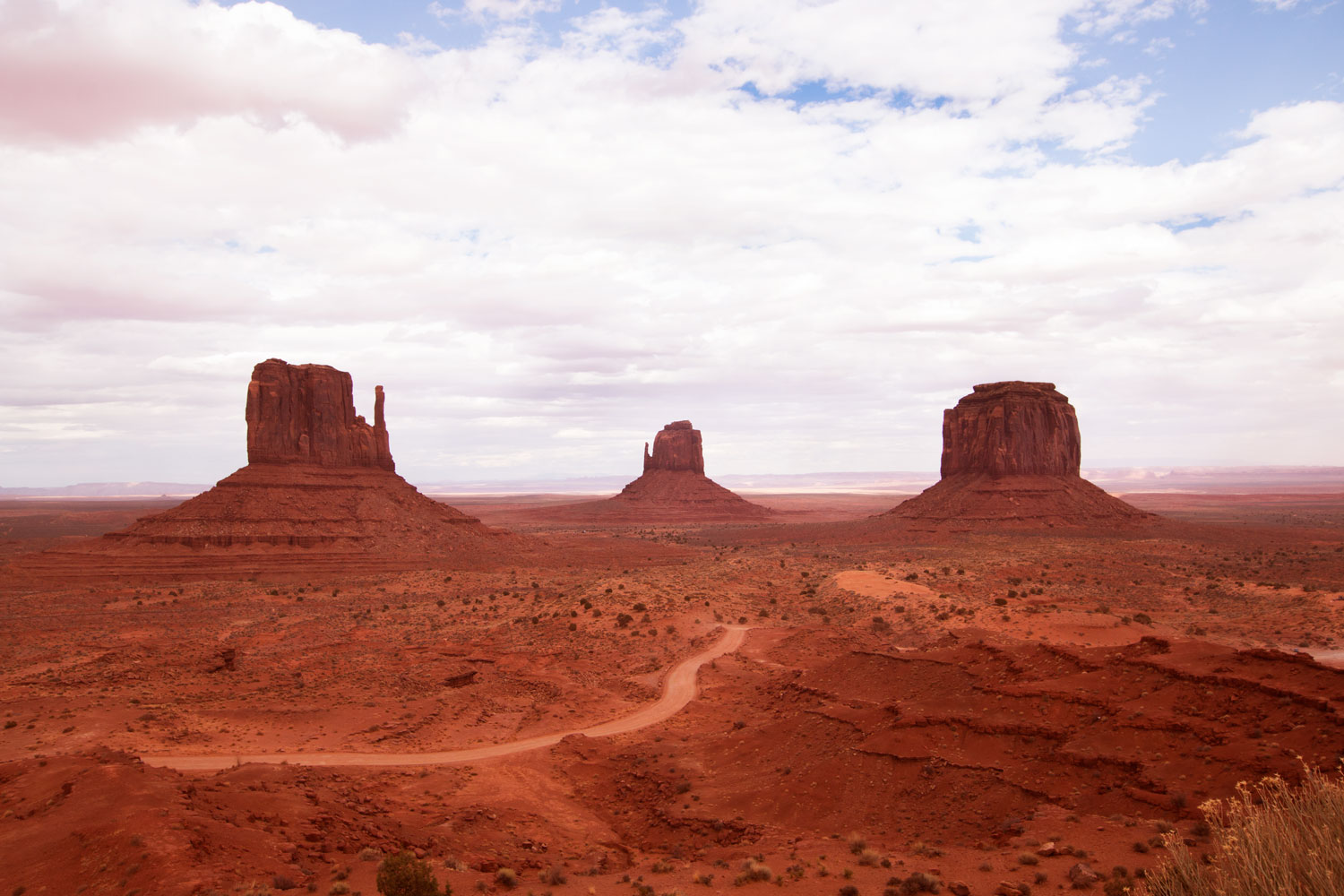 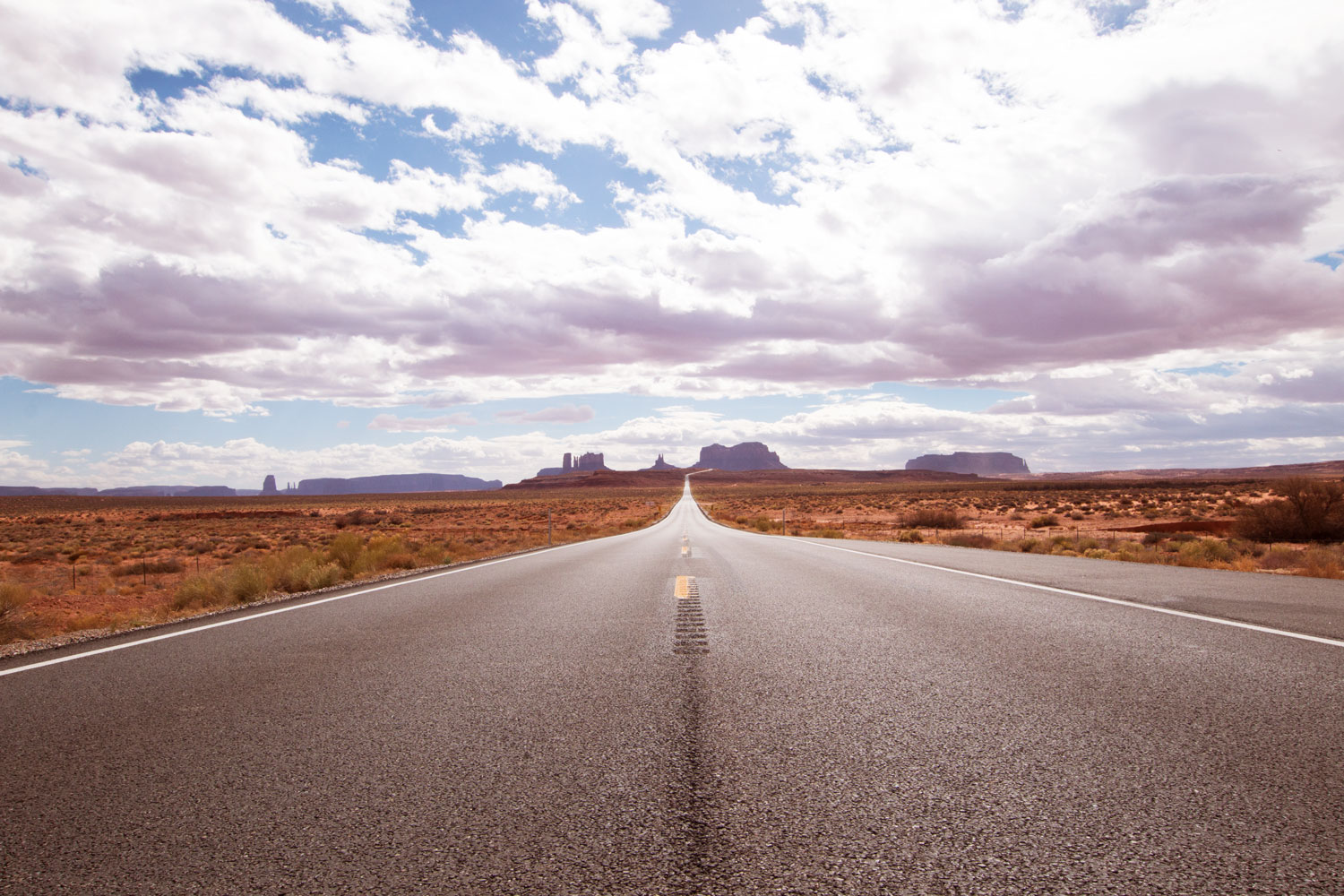 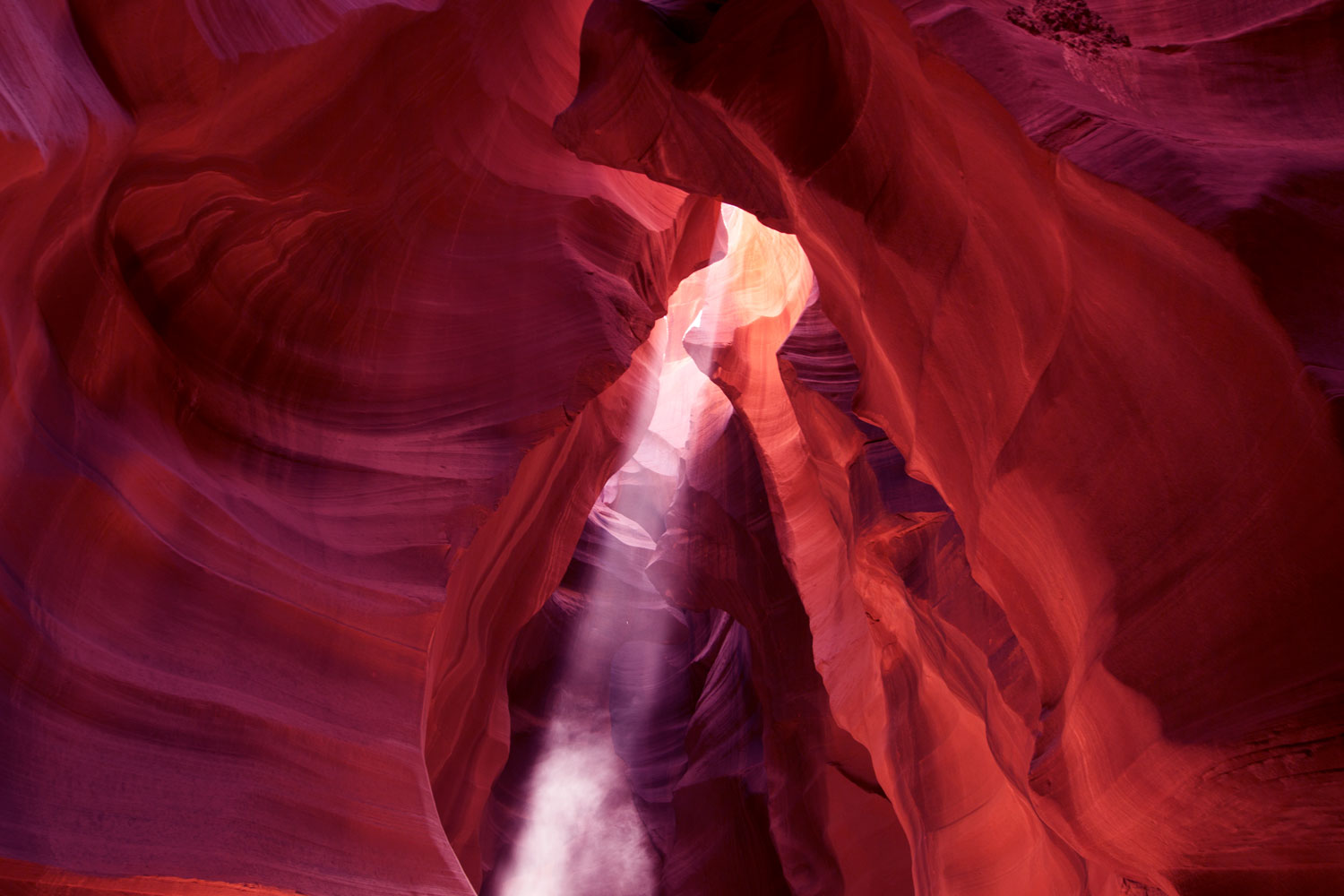 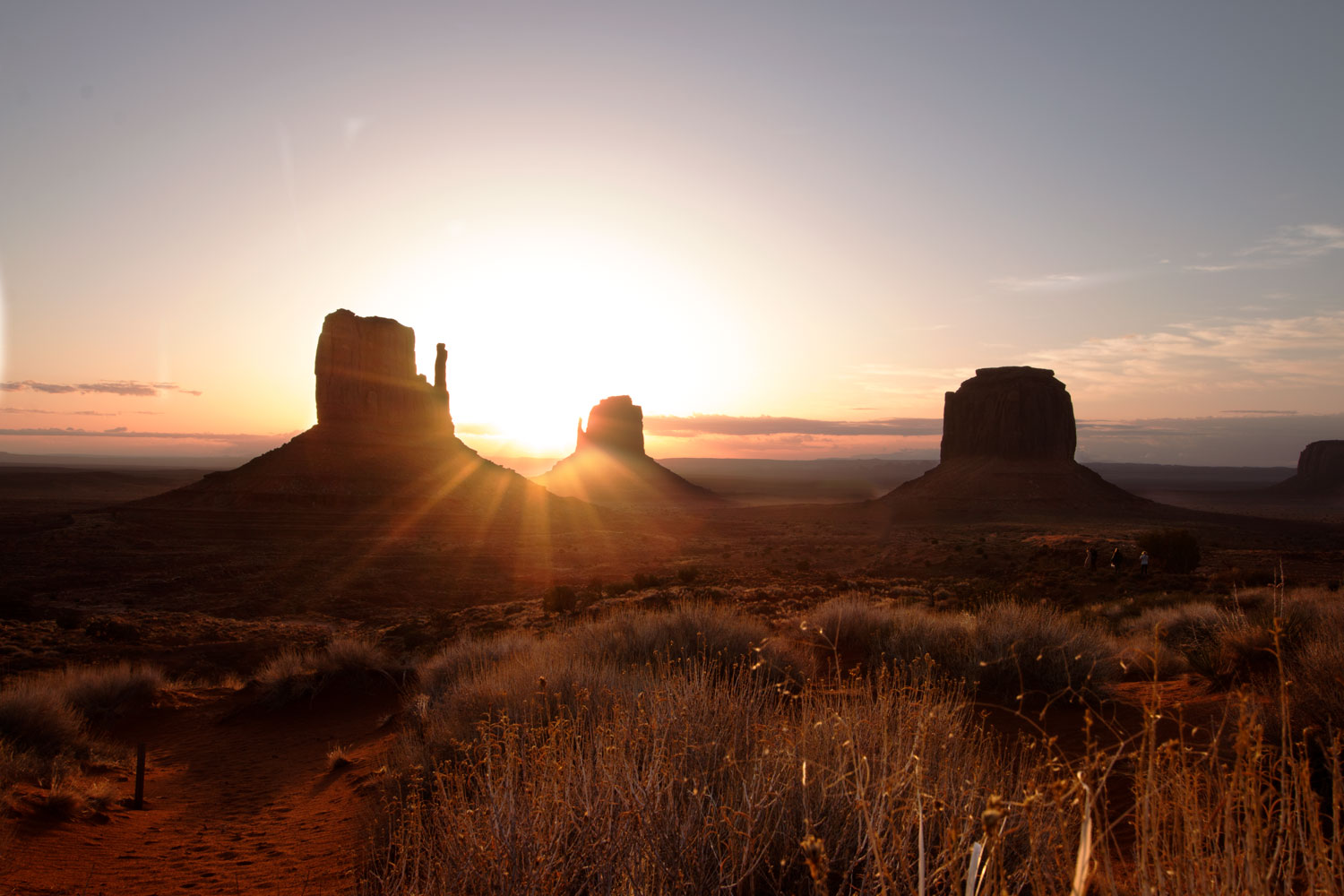 Remember that scene in Forrest Gump when he finally decides to stop running? Well where he gives up and turns around is smack dab in the middle of Monument Valley. Monument Valley is a red-sand desert region on the Arizona-Utah border and is part of the Navajo Tribal Park. The Navajo Nation allows visitors in from all across the globe to immerse themselves in the beauty of the red sandstone. As you can see, these views are some of the most definitive images of the American West.

We did some back country camping in Monument Valley, and it was quite eventful. While there is a really cool hotel you can stay at and browse the gift shop, we picked a camping spot right in front of the 3 giant rock formations. The picture above is the sunrise photo, we had a lot of early mornings this trip, and they were all well worth it. The red sand of this environment gets everywhere! I had it in my hair, in my pants, in my toes, etc. The wind was often unforgiving and the hot sun with little shade goes to show you the treacherousness of the giant desert. 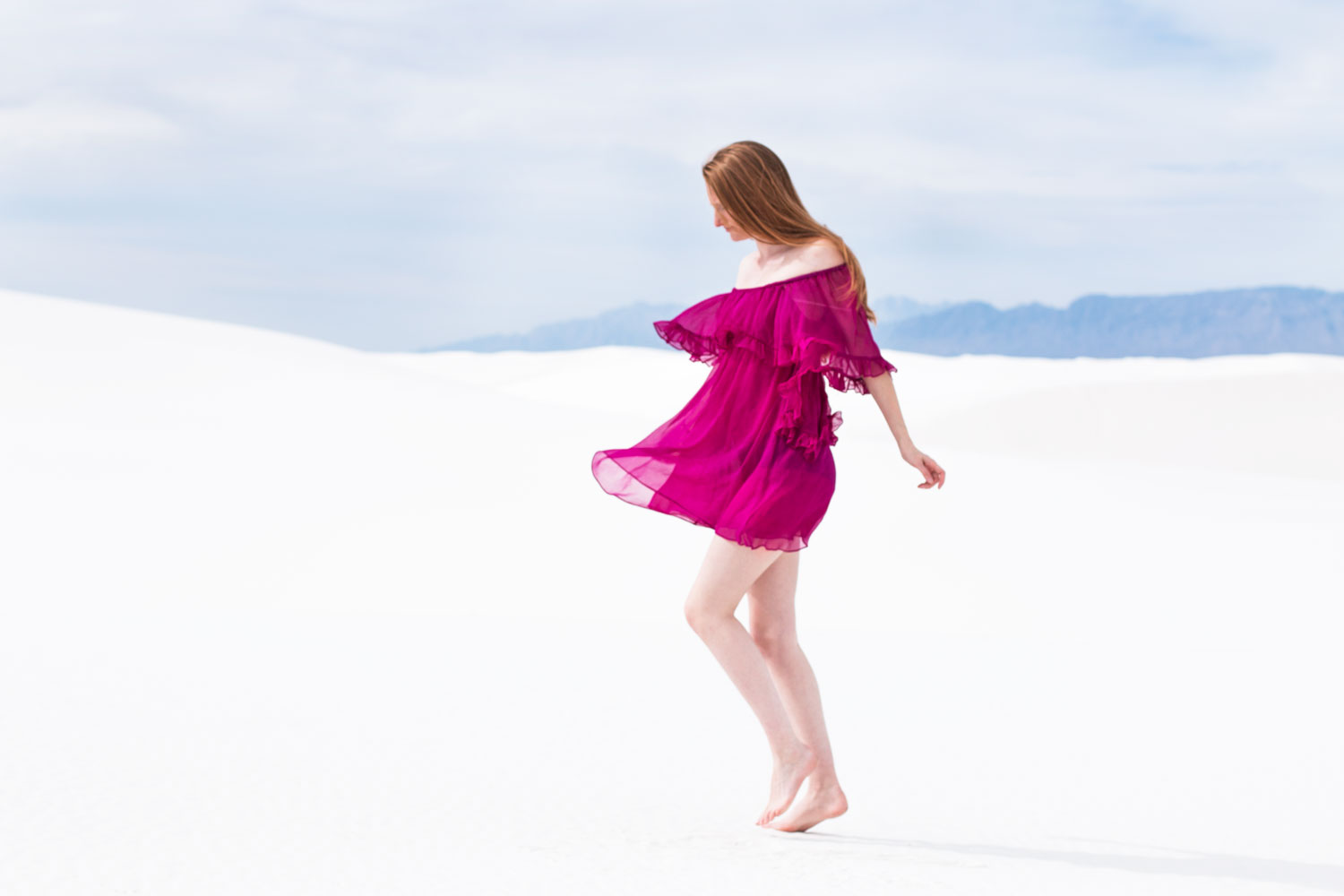 By far one of my favorite parks! Driving through New Mexico was such a blast. Scott and I were talking about anything and everything from Fear and Loathing to Las Vegas to Breaking Bad. While Scott likes the desert environment and could see himself living in it, I don’t think it’s for me. I prefer forest and a lot of rivers and trees. Although don’t let this barren place fool you, there was a lot of elevation and mountains in NM. In fact they have a few world-renowned skiing resorts in New Mexico too!

Speaking of skiing – doesn’t it look like you can just glide down these sand dunes on a pair of skis? A lot of kids had sleds and were riding down the dunes – it looked like so much fun! I don’t think it’s possible to not have an impromptu photo shoot in White Sands National Park. This trip most definitely wasn’t a “blogger trip,” but I managed to pack this flowing frock that I thought would make the perfect contrast to the all-white sandy park. It only took me 20 spins under the beating sun to get this shot – and let’s just say I get dizzy pretty easily. The effort was well worth it, I think Scott and I agree that this is one of the coolest pictures we have taken. Our other pictures of the park miraculously disappeared when I was uploading them, so I’m sorry I can’t share more. This park is for the books, you need to make the trip. It’s totally worth it! 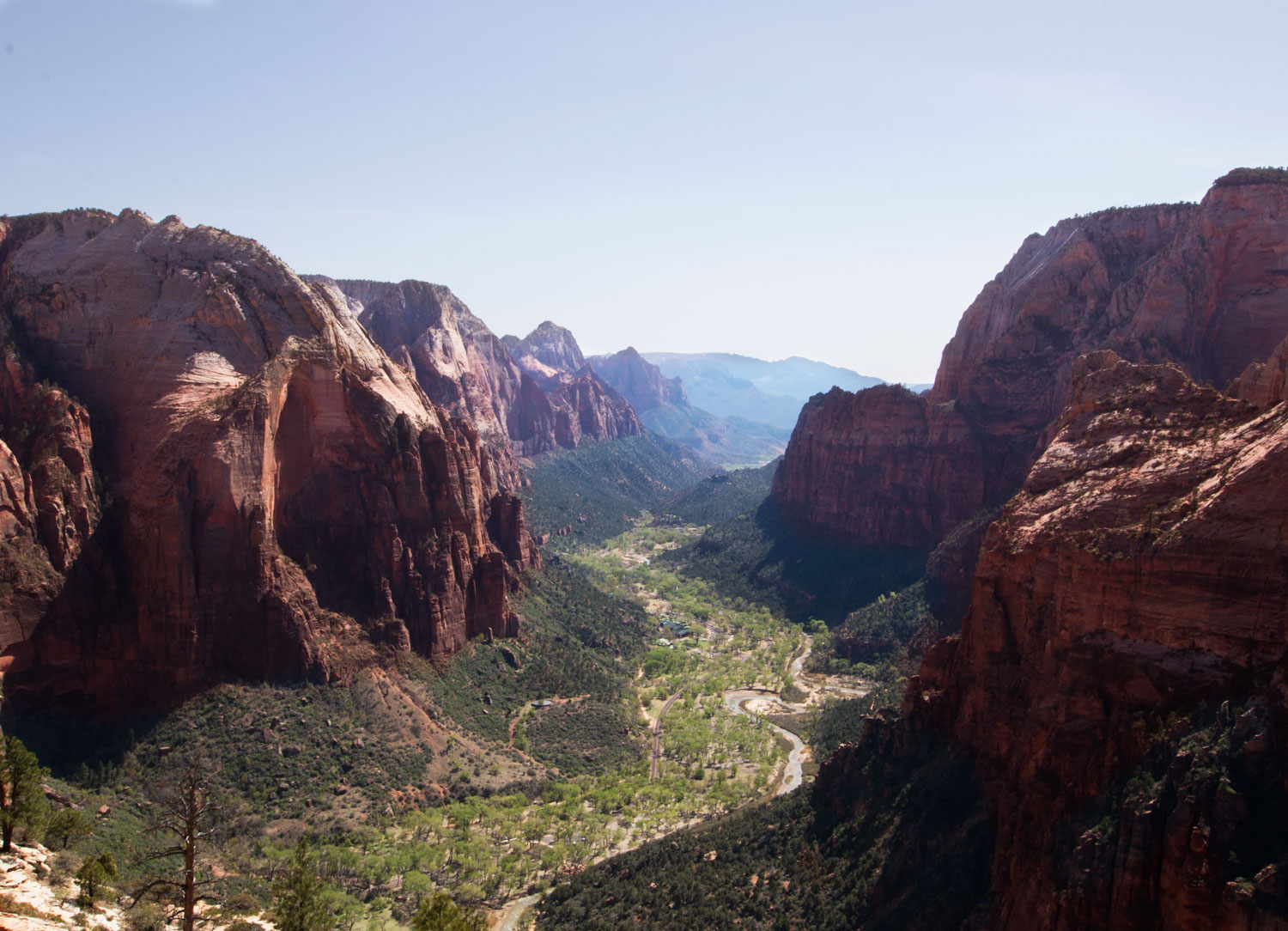 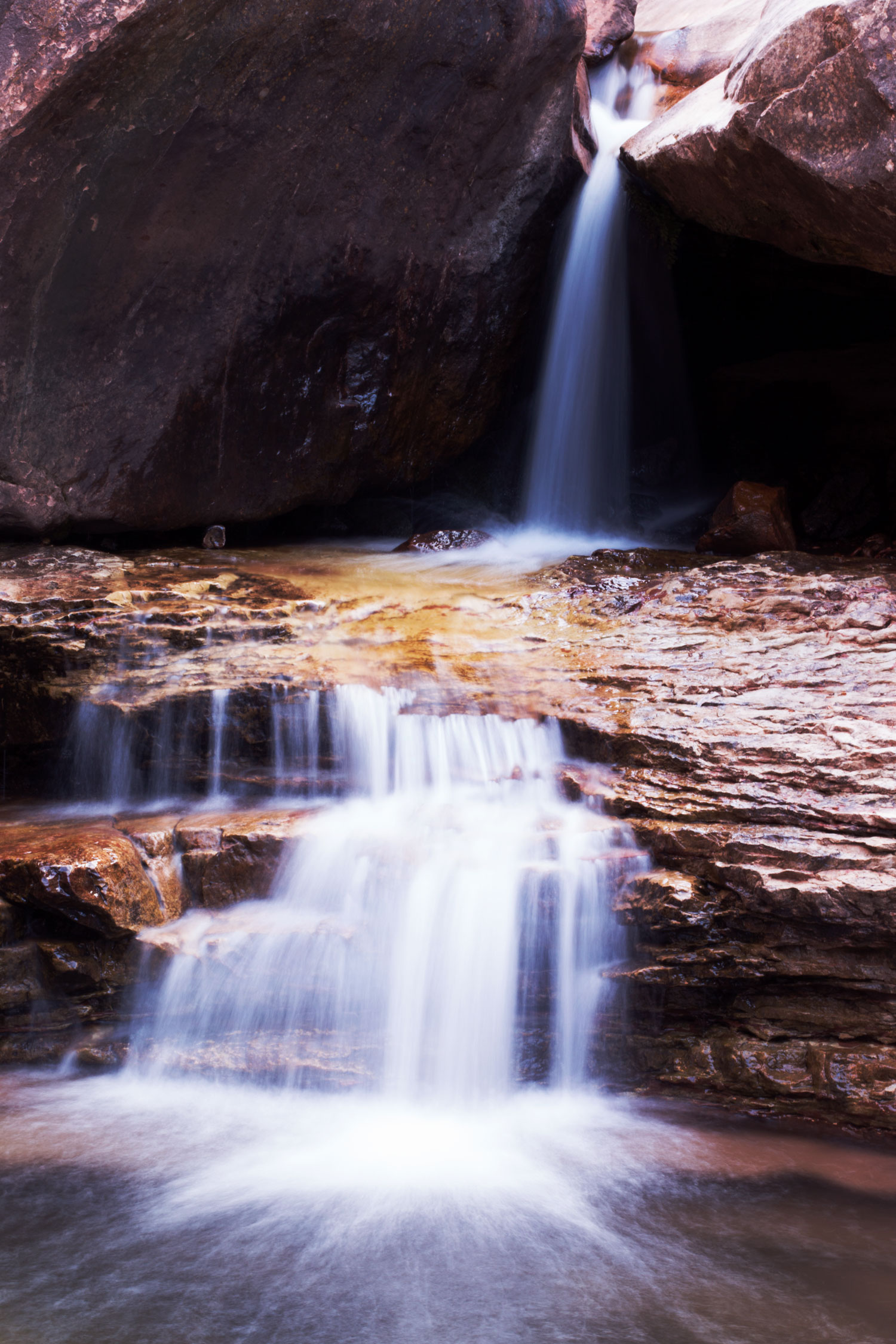 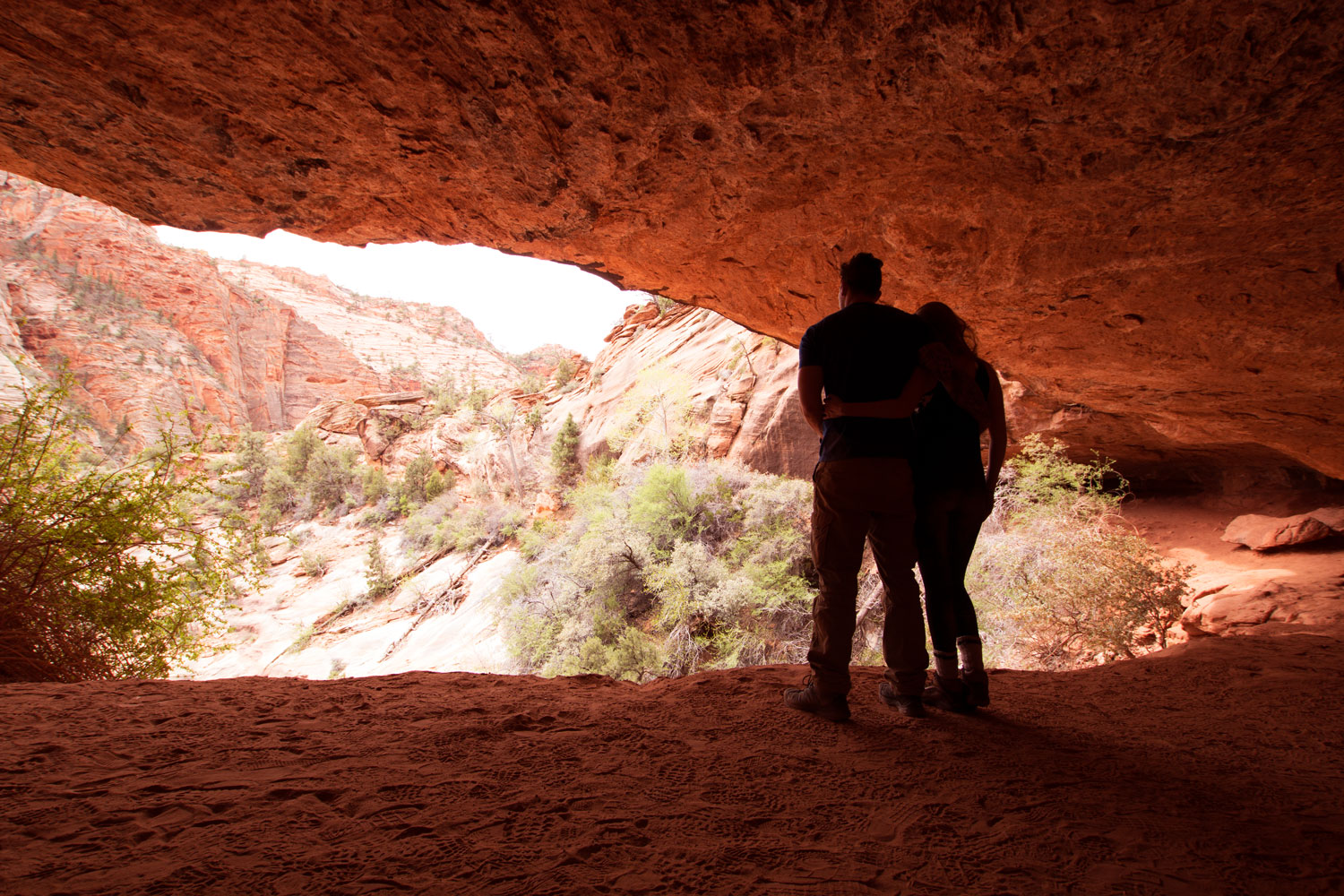 Oh, Zion. Words cannot express the stunning beauty of this National Park. Before I went into the park, Scott told me that this was his all-time favorite. Leaving the park, it was my favorite as well. This park is for everyone of all hiking levels, but Scott and I chose to do the more difficult trails. First we did Angel’s Landing, which is a 1,488-foot tall rock formation with switchbacks up and down the side of it. Once you’re at the top plateau there is another section of hiking – if you dare. Once you head up to the next level, there is nothing keeping you from tumbling down to the bottom but a linked chain and your own two feet. What an intense hike, but the beauty at the top is so rewarding. The valley and river are tucked away behind the massive rock formations. Climbing Angel’s Landing is one of those “I’m on top of the world” feelings, AKA the best feeling ever.

Our next day I got altitude sickness and was feeling really bad. We decided to let our legs rest and take it easy that day. We drove through the park and found an easy hike. There was this ridge underneath the sandstone and we though it would make a great photo opp. Our shadowy bodies contrast the red and green nature so well. We want to get that shot, and many others framed! There is a hotel lodge in the middle of the park with a snack bar and a beer garden. We ate lunch and soaked in all the beauty around us. Zion really is such a special place.

Our last day in Zion we took the Subway hike. This hike requires a special permit and they only let 80 permits out a day. This was challenging like Angel’s Landing, but in a different way. While Angel’s Landing was vertical and steep, this hike was directly through a river. It was slippery, wet and a little cold because you are so far down the caverns. Once you hike about 5 miles into the river you start to see the beautiful erosion caused by the wind and the rains. The way the rocks turn and have a tubular shape to them goes to show you why it’s called “The Subway.” At the end of the hike you make it to all of these really cool green pools of water. And if you swim through them, which we did, you make it to a waterfall in waist deep water. Of course it was freezing cold, but it really added some extreme adventure into the hike. After this hike I’m not afraid to get my feet or socks wet! What an amazing day! 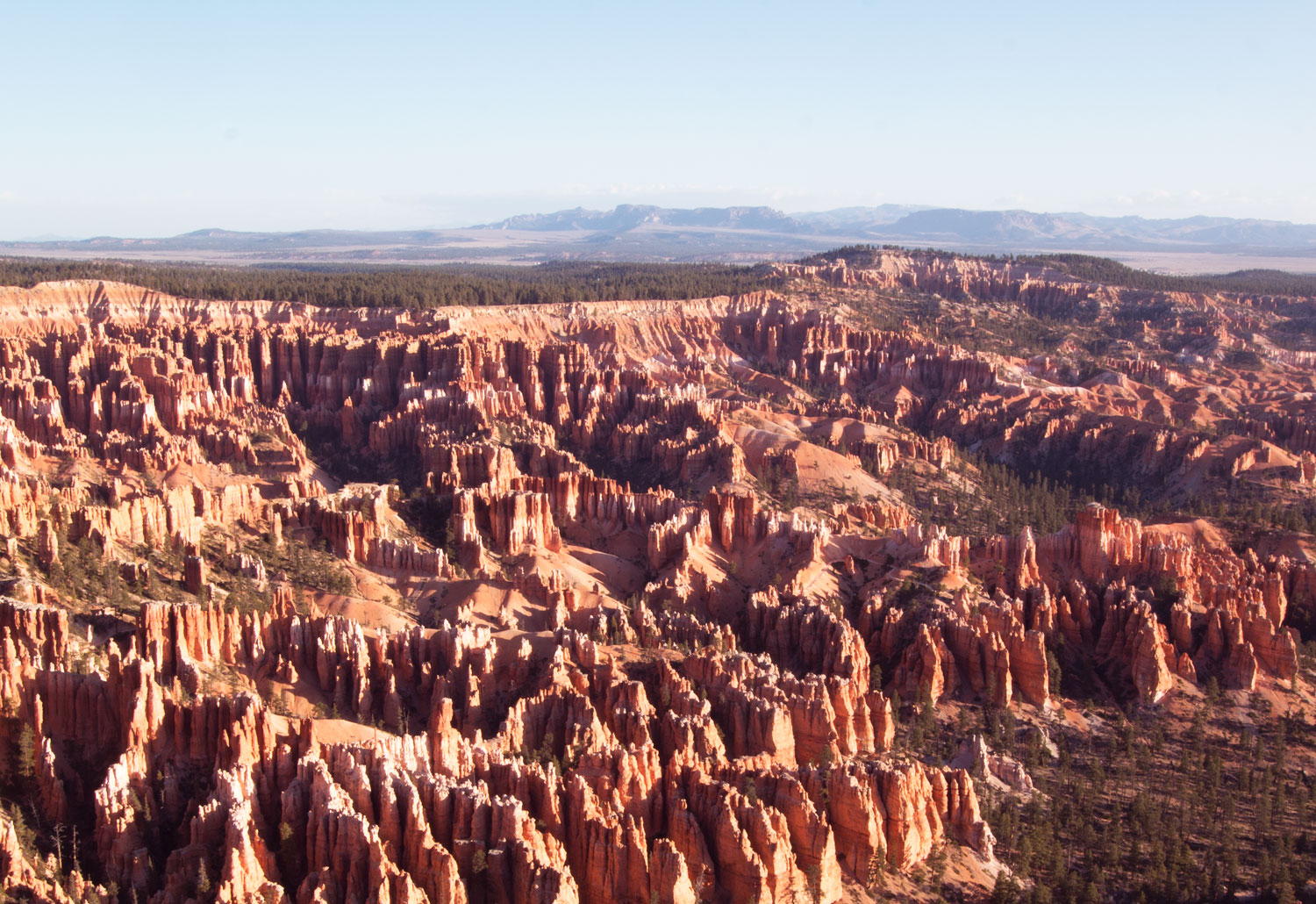 Scott and I decided that Utah is the most beautiful state. We have been here twice before, and love the skiing scene, as well as all of the incredible hiking. What is most interesting to us is that you can go from these red, creepy looking rock formations to what seems like the Swiss alps in a matter of 2 hours. Between Zion, Bryce, and Park City – Utah is one of the coolest places I have ever been. How lucky we are to have such a stunning state here in the United States!

Bryce Canyon National Park is known for  its crimson-colored “hoodoos”, which are spire-shaped rock formations. This park has prime viewing times for sunup and sundown. We woke up super early for sunrise photos hitting the hoodoos just perfectly. They make such a cool contrast with the lighting. Scott and I got asked if we were professional photographers by other pros, I guess we fit the build with our amazing tripod and camera equipment. 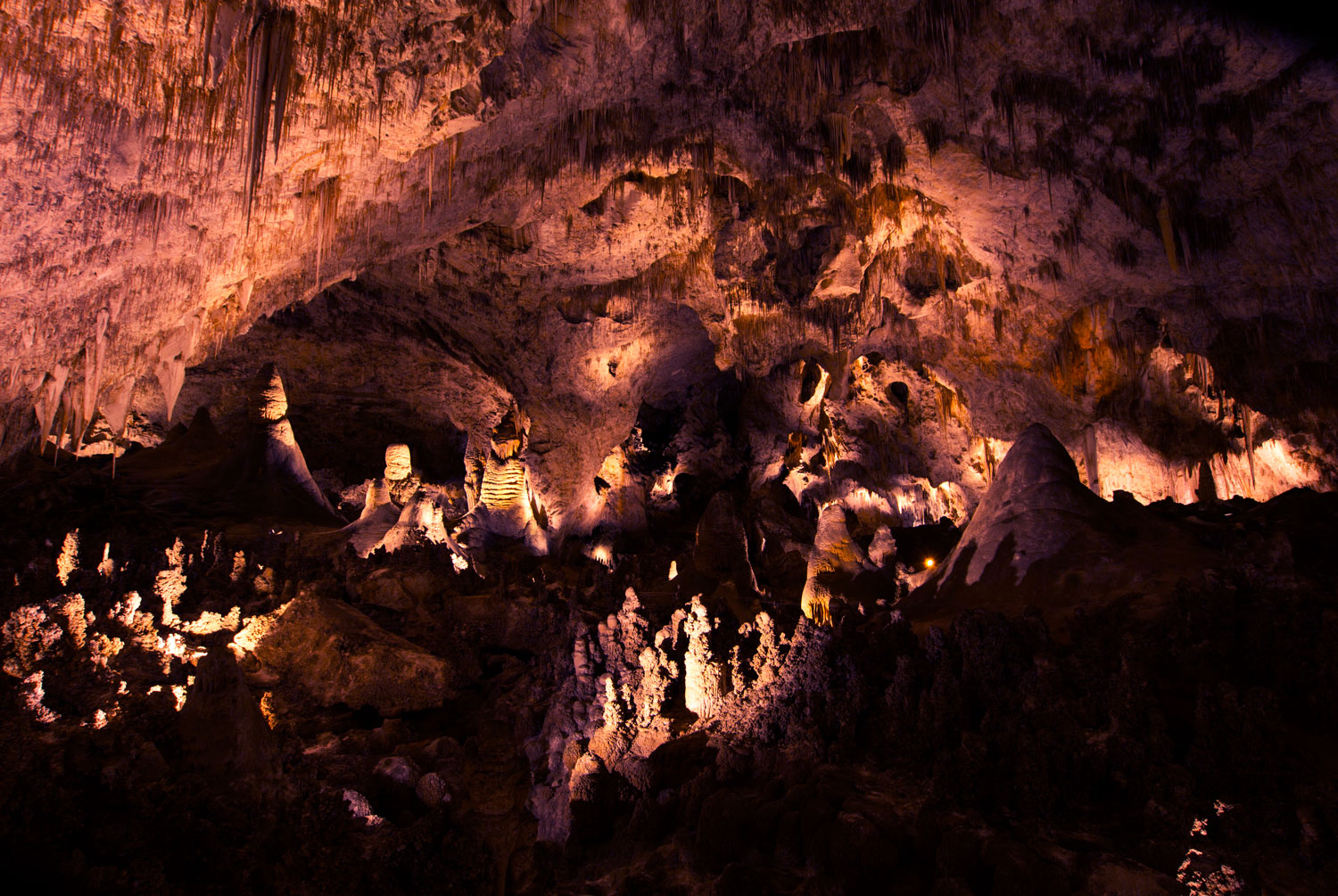 All I have to say is that caves are SO COOL. Carlsbad Caverns National Park is in the Chihuahuan Desert of southern New Mexico. It features more than 100 caves. Stalactites cling to the roof of the Big Room, a huge underground chamber in the cavern. Stalagmites grow from the bottom up, and are created by the mineral drippings from the caves ceiling. After walking down 800ft of switchbacks in the dark cavern, you make it to the bottom level. All of the stalactites and stalagmites are dimly lit up so you can see their formations and details. In the summer when the bats are in season you can sit at the cave’s entrance and watch all the bats fly out for their feeding time. I highly recommend traveling to this cave or researching caves in your area!